A bit about myself: 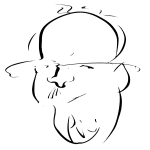 My favourites include reading (mostly Science Fiction and Fantasy), movies (ditto), music (blues, rock & pop, a little jazz, but definitely no techno, hiphop, or rap), gaming (not only on computers), volleyball, darts (both more watching than playing in recent years), and - last but not least - computers and software.

Apart from that, there's not much to see here. There's only: